I know that on the schedule for this week was the story of the centurion’s servant in Luke 7, as I thought that it might be a good way to explain authority and respect.  Well, we tried that on Monday, complete with little green army men to act out the story.  By the end of the day, I could see that they weren’t really understanding and were only consumed by the army men’s tiny guns, so our new respectful story illustration is….Moses and the Burning Bush!  This one was much easier to capture.  When God began to speak to Moses through the burning bush, he didn’t stop and think about whether or not to remove the shoes…he threw them off and hid his face too!!
My children love this story, and acting it out is a favorite activity at our home.  Although Levi’s sugar cane staff disappeared to the trash last month, it lasted for over a year’s worth of playing Moses.  This week’s production was about 10 minutes long, but I had to include a short clip of Pharaoh Levi coaching Moses Mamita in her lines.

We also talked about practical ways to be respectful, including using manners and being polite.  Each day we focused on a different scenario; meeting someone for the first time, answering the phone, answering the door, table manners, and using please, thank you, and excuse me.  It was fun to role play in English and Spanish and talk about cultural differences, like greeting someone with a handshake in the U.S. versus kissing on the cheek here in Panama.
My highlight of the week was our cooking day.  Not only were elephant ears super fun to make, but we decided to practice our table manners while eating them.  We put a candle on the table to set the atmosphere, then went to answer the door as the children pretended to enter our fancy restaurant.  They really got into it, copying my accent and all with Levi calling me “Sir Cook.”  Halfway through the meal, Josh staring at the candle in the middle of the table yelled “Look!  It’s the burning bush!”  hehe 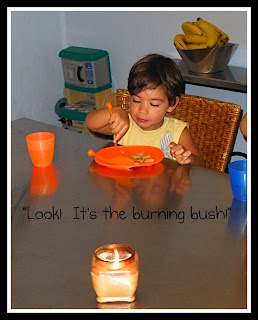 As for the recipe, I decided to take a risk and try a new recipe found on the back of the Coach’s Oats, a new oatmeal they are carrying at PriceSmart.  We were all pleasantly surprised even with substituting whole wheat flour.  So much so, that I had to make another batch for lunch to share with Papito.  We decided go with the new recipe since elephants are herbivores, adding oats and wheat “grass” to the recipe.  I was just going to make elephant ears (pancakes with a honey e)… but got inspired by memories of my sister’s chocolate chip pancake creativity, and we ended up with Ellie Elephant holding a blueberry in her trunk for a second course. 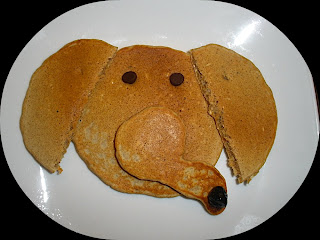 I got a little carried away researching Ellie, and was pleasantly surprised that Ari was a walking elephant encyclopedia too!  We had lots of fun walking like elephants, swinging our trunks, and hiding the babies in the middle of the mommy circle when the big lion came to attack.  We learned that they have a big sweet tooth, preferring things like mango, coconut, pineapple, plums, berries, and at the zoo…pumpkins and watermelon!

I won’t retype all my findings, but check out these sites for more interesting elephant facts and youtube for some videos of elephants eating too.
http://nationalzoo.si.edu/Animals/AsianElephants/factasianelephant.cfm  Their web cam is down at the time, but they have a great fact page and photo gallery
http://www.elephantcenter.com/New_Calf_Videos.aspx  Baby elephant video and a concise fact page
http://www.animalcorner.co.uk/wildlife/elephants/elephant_about.html Another good overall page
http://www.elephants.com/meetElephants.php  Interesting page introducing all elephants in the sanctuary and their favorite food
For our Friday edition of Jungle School, we had an elephant art project planned.  However, the children were playing so well together that we made the day’s project “to go.”  Jungle Mamas, check the slideshow at the top to see the shapes needed and how our elephants turned out.