Printables for this week:
Prayerful Bible page
Prayerful Chart from Hubbard’s Cupboard
Philippians 4:6 from Hubbard’s Cupboard
Zoo ABC – letter v
Zoo Math V – #22
Our character trait this week was prayerful.  I had so many ideas and wanted to start some prayer journals, but the time just seemed to fly right on by!  Maybe that’s because we were learning about flying along with our zoo friend Vincent Vampire Bat.  I must admit, bats are not my favorite creatures.  In fact, I am really, extremely, VERY afraid of them!  In college I took a 3 week summer biology course, and as part of it we had to go very quietly into this cave where the bats were roosting.  I couldn’t do it.  Got the cold sweats, shakes, and everything, and was ready to risk my grade if necessary, but could not bring myself to go in there even on my hands and knees.  hehe  So maybe it was a good thing for me to explore bats a little more this week.  We actually didn’t talk about real “Vampire Bats” much, but focused more on the fruit eaters.  Levi was so curious as to what are the largest bats in the world, and I found this cool video from National Geographic for Kids.  The answer…Flying Foxes with a 6 foot wing span that live in Australia.  Check them out…
Our cooking project this week was short and sweet, Vanilla Pudding in the Vita-mix!  A few children just went for the whipped cream on top, but us Mamas were more than able to take care of the leftovers.  Right Miss Peggy?  😉
It ended up being more like “Fun-ny” Friday this week, as many JungleMamas had various things going on.  Amy and Bella were our only guests of the day! 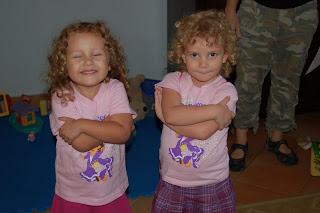 On the agenda for the Mamas was a Vita-mix demonstration day!  I had ingredients ready for nut butter, frappes, ice cream, or smoothies…whichever sounded the best.  For the children, we were supposed to make a volcano erupt, but whenever I asked the children if they were ready they wanted to just “play a little longer.”  So, Amy and I decided to make our own experiment…lava cake!  We followed this recipe from Savory Sweet Life.  Check out the photo…isn’t it just amazing?  It was fairly easy, smelled great and tasted yummy.  However, the middle was not like molten chocolate lava like we were expecting.  🙁   (I think I overcooked it by just a minute or two, because one of the children got a tiny bit of goosh in the middle.)  We also made some vanilla ice cream in the Vita-mix to go along with our very tasty dessert.  These were the only photos I got, as the lava went down the hatch mighty quick.  hehe 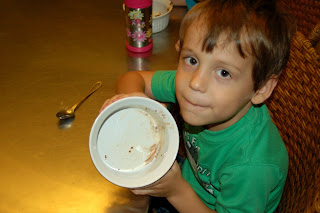 I became so consumed with striving for that molten lava center, that we tried again on Saturday afternoon.  This time using this recipe from Recipe for a Gluten Free Life by Mrs. G.F.  It smelled great and tasted great too, however…no lava.  I was paranoid to overcook it this time, and instead undercooked the first one I tested.  A bunch.  hehe  So, I ended up with three overcooked and one batter bowl of lava cake.  What’s a creative Mamita to do?  Well, dig out the center of the overcooked and replace with a little batter of course.  Cover it with a little scoop of Vita-mix ice cream, and nobody questioned.  hehe  I still want mine to look like that first picture though.  Any lava cake success stories out there?