Hey Preschool Mama, need a safe space to share and learn? Join us for free!
Home / Recipes / Strong Man – A Green Smoothie Your Children Will LOVE

How would you like some chocolate, peanut buttery ice cream that’s actually good for you?  That my friends, is called a “Strong Man.”  Don’t let the bright green smoothie deceive you…it’s delicious! 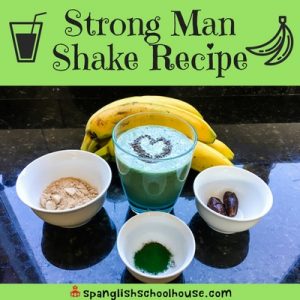 We eat our meals Colombian style, “breakfast like a king, lunch like a prince, dinner like a pauper.”  So, if you want to know what’s for dinner at our house every night…it’s a Strong Man!  Always.  It usually accompanies some kind of sandwich, salad, or leftover (homemade) pizza, depending on how big lunch was.

If for some reason we run out of frozen bananas there is much weeping and gnashing of teeth…from everyone but Sissy that is.  hehe  One day we will convert her, but it’s still a little too “green” for the princess’ daily consumption.

Why the crazy name?

Bubby was just two when we started making these, and I told him it was green because it was really good for his body.  It would make him grow up into a strong man.  So “Strong Man” just stuck, the way many other silly names and nicknames happen in our house.  hehe 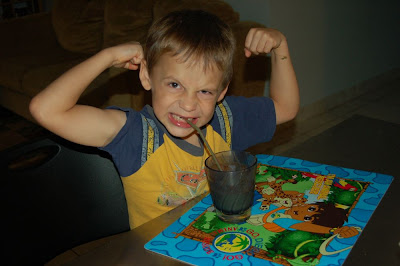 I was going to change the name…you know make it more “Bloggy-Search Engine-Friendly.”  I just can’t though.  The Strong Man is a legacy, known by all our friends and many passer-bys who have swept through our house at dinnertime.  If only I had captured first reactions to the question “Do you want a strong man?” though.  That would be some entertainment!

What’s so special about these random ingredients?

We have to start with the most important ingredient which is…the one that make it GREEN! Spirulina is a spiral-shaped type of algae that is a dark blue-green color.  Yes, that’s right.  It is an algae, which is why the way it is grown and harvested is super important to retain all of the nutrients.  All spirulina is NOT made equal, and this is our favorite brand by far.  A 16 oz. jar of powder lasts our large family more than six months, and is top quality.

Spirulina is a complete protein, containing all nine of the essential amino acids that our bodies can’t produce on their own.  This makes it great for vegetarians, or anyone looking to up their protein while avoiding the extra calories.  Unlike meat, spirulina is a sustainable source of protein that has a very small impact on the environment.

Spirulina is rich in Omega-3, 6, and 9 fatty acids, and contains chlorophyll which helps the body to eliminate toxins and boosts the immune system.  It also contains gamma linoleic acid, which is known for its anti-inflammatory properties.  Is that all?  Nope.  It also has other essential vitamins like B12, K1, K2, and A, and minerals like potassium, chromium, copper, magnesium, manganese, phosphorus, selenium, sodium, and zinc.  Whew!  Spirulina is a great source of antioxidants with four times the antioxidant power of blueberries!  It also boosts energy levels, supports cellular, cardiovascular, eye, and brain health.

The key here is to use very ripe bananas.  When they get to the point where nobody in the house wants to eat them, peel them and place them in a single layer on a silicone baking sheet in the freezer.  Once frozen, collect them in a ziplock bag and use them for smoothies.  Frozen bananas are the secret to making the texture creamy and ice cream like.

Did you know…yellow bananas are much easier to digest than green?  They also have higher levels of antioxidants as they ripen.  Once fully ripened, bananas produce a substance called TNF (Tumor Necrosis Factor) which combat abnormal cells.  So ripe bananas actually have anti-cancer qualities!

Dates provide sweetness and just a little bit of chew.  Before you dis it, you have to try it!  Dates also contain soluble fiber which is good for your digestive health.  They are a great source of iron, magnesium, manganese, selenium, and potassium.  What does this mean?  They help prevent anemia, and contribute to the health of your bones, blood, and immune system.

Chia seeds are tiny, but a powerhouse of nutrition!  They contain the highest level of Omega-3s of any known plant.  An ounce serving (which we use in our strong man) contains 10 times the Omega-3s of an equal serving of walnuts, more iron than a cup of spinach, 4.7 grams of protein, as much calcium as a glass of milk, 11 grams of finer, and as many antioxidants per serving as blueberries!  Chia seeds are great for digestion, act as a natural appetite suppressant, and have been proven to be just as effective as energy drinks to give athletes the stamina and endurance they need.

I’m not talking about Nesquick here, but real cocoa powder.  Raw is even better!  Cocoa contains the substance phenethylamine, which acts as a natural anti-depressant.  Woohooo!  Cocoa may also boost endorphins and serotonin levels.  Maybe we should just call it “Happy Powder.”  Cocoa is one of the highest polyphenol-containing foods, containing more antioxidants per cup than a serving of red wine or tea.  If that’s not enough, cocoa may lower cholesterol, reduce the risk of blood clots, increase blood flow to the arteries, lower high blood pressure, boost cognitive performance and provide essential minerals such as calcium and potassium.  The only drawback, for children, is the caffeine factor.  Only one of my children has been sensitive to the caffeine in cocoa.  However, it was enough night wakings, that we decided to take her portion out of the blender before we added the cocoa.

According to World’s Healthiest Foods, sesame seeds are an “excellent source of copper and a very good source of manganese, but they are also a good source of calcium, magnesium, iron, phosphorus, vitamin B1, zinc, molybdenum, selenium, and dietary fiber.”

If you use the dates and ripe bananas, the smoothie will be sweet enough.  However, if you want to forego the dates, or if you are new to natural foods and want your children to gulp this down…these are the answer.  We love our stevia drops!!  My favorite is English Toffee and Luigi likes Vanilla, and I usually put just 3 drops/glass.  These are not to be confused with other stevia powders that can have a nasty aftertaste.  You really have to try them.

Nut butter adds richness and protein, but I say “optional” as I get lazy about cleaning the blender.  hehe  Nut butter means I have to use soap, otherwise it rinses squeaky clean.

Tips: You can adjust the ice/liquids to make it as thick or thin as desired.  You can also substitute any type of milk for all of the liquid if desired.  I’ve use many combos like rice, almond, and chocolate soy.  This is my most frugal option that still tastes yummy, so take my word and don’t try it with any less than 1/2 cup milk! 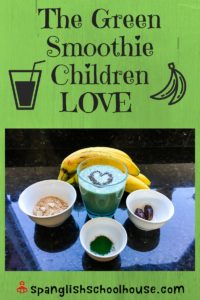 This recipe makes 5 cups, and serves two adults and one child in this casa.  It was originally posted on our old family blog… April 29, 2012.

Since then, we moved from the tropics of Panama to the mountains of Colombia and had to alter the recipe a little. Our children would grab their glass every night and have blue lips and shivering little bodies by the time they got to the bottom.  Here are the changes we’ve made:

Here’s a printable recipe.  (You can even alter the servings to your liking.  Isn’t that spiffy?) 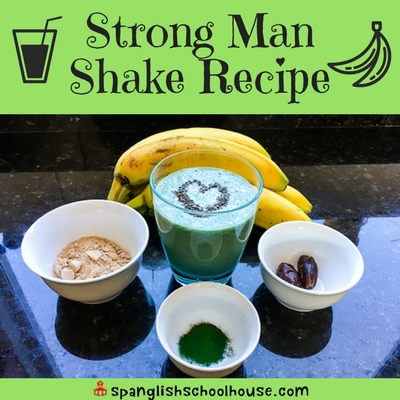 Hey! It is nice to meet you! 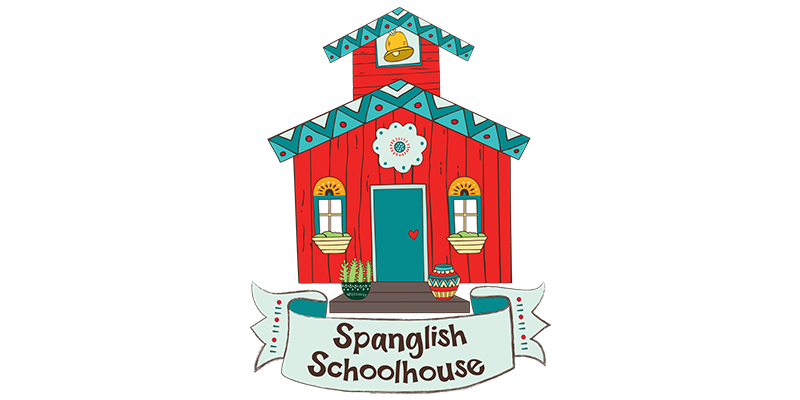