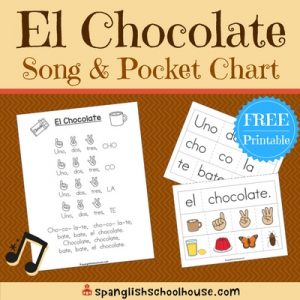 El Chocolate is a great first song for children to learn in Spanish, and it couldn’t have fit in better for the first week of our bilingual preschool program!  We are learning about the color brown, doing our Brown Bear art page, and practicing kindness with the story of the Three Bears. 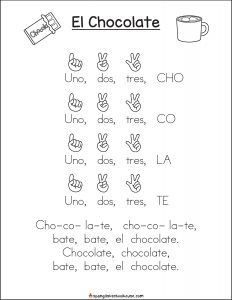 This fun version actually shows the chocolate being made while the children sing.

This version of the song starts off extra slow, which is great for beginning Spanish speakers.  Next come the fun part as the song goes faster and faster, which the children love.  They are getting lots of repetition in, but think it is just a great game.  Wooohooo!

The lyrics of the song teach counting to three in Spanish (uno, dos, tres) followed by breaking the word chocolate into syllables, so we used this song as an introduction to blending syllables.  I had the children to point to their head, shoulders, hips, and knees for each syllable, then swoop their arms down while saying the word.  We also created these pocket chart cards to help them visualize the syllables, and point to them as they sing.

Yes, this was an advanced activity for my little learners, but they were too busy laughing to get frustrated.  We added some more four syllable words and verbs to sing to the same tune.

Li-mo-na-da, li-mo-na-da, toma, toma la limonada. (Lemonade, lemonade, drink the lemonade.)
Ge-la-ti-na, ge-la-ti-na, come, come la gelatina. (Jello, jello, eat the jello.)
Ma-ri-po-sa, ma-ri-po-sa, vuela, vuela la mariposa.  (Butterfly, butterfly, fly butterfly.)
Cu-ca-ra-cha, cu-ca-ra-cha, pisa, pisa la cucaracha.  (Cockroach, cockroach, stomp the cockroach.)
Sorry if the last verse is a little much, but after living 11 years in Panama, killing cockroaches the size of your finger becomes second nature.  hehe  The spotter would yell “Cucaracha!” and keep their eye on it while the others would race for the chancleta (or flipflop).  One part of tropical living I definitely don’t miss!