Printables for this week:

Psalms 85:8a from Hubbard’s Cupboard

We started the week by talking about how Samuel listened to God, then made bunny listening ears.  Who knew they would be such a hit!  Peter and his Papito Matt recently recorded a song called Cangrejos Amables (Friendly Crabs) and so the children decided to turn it into Conejos Amables (Friendly Bunnies) .  Wow, phonemic awareness practice in Spanish…I just realized that.  hehe  Anyway, every spare chance they got this week, they were chasing each other through the halls screaming “CONEJOS AMABLES!!” and thank you Lord we had crashes and tears, but no blood.

Acting out the bible story is a great way to really “make it stick,” and Samuel is an easy one to work with.  Make God’s voice magnified by using a toilet paper roll tube to wake up the sleeping Samuel, then have Samuel run to Eli and get sent back to bed three times. Talk about how they both might have been feeling/thinking.  Finally, have Samuel wake up and say “Speak Lord, I am listening!”  (In our bible, the story finished with God telling Samuel he was going to punish Eli’s wicked sons.  I was not going to focus on that part, but when I skipped it Levi said “Wait Mamita!  You forgot that God told Samuel he was going to punch Eli’s sons.”  hehe)

Other highlights of the week included:

– using “b”lowpens for the first time

We did our first independent cutting activity…balloons!  I love the different personality everyone’s balloons have. 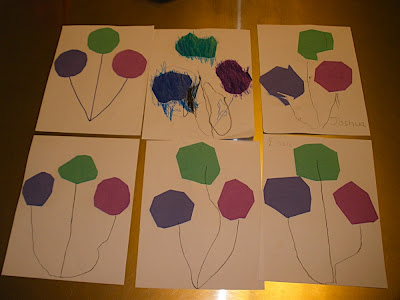 To end our day, every got a balloon with their name written on it.  We talked about how Samuel was a prophet of the Lord, and how in 1 Samuel 3:19 it says “The LORD was with Samuel as he grew up, and he let none of his words fall to the ground.”  We threw the balloons up and tried to keep them from falling to the ground.  Just like the bunny ears…chaos soon erupted, but isn’t that the joy of preschoolers?